Easter Sunday is my favorite day of the year. I love meeting together as a church after having corporately embodied the wait between the cross and the empty tomb. I love waking up ready to sing resurrection songs with God’s people. I love hearing of the hope we have because Christ lives and joyfully declaring to one another “He has risen indeed!”

It has not always been this way though. I have not always looked forward to Easter with such anticipation. I suspect this is so for a number of reasons, including my own spirituality and progress in the faith. But in large part, it has had to do with my lack of understanding regarding the meaning of Jesus’ resurrection.

Back when I served in campus ministry, going on regular short-term missions, we would share the gospel here and abroad using an illustration. I would walk through creation, sin, Jesus’ death, and his promise of salvation and did it so often (maybe hundreds of times) it became second nature. But as often as I presented it, I still had to make a conscious effort to remember to tell people Jesus did not stay dead.

At the time, my understanding of the resurrection largely centered on its apologetic force— Jesus defeated death and Satan, proving he was truly God. Thus, we could be sure his teachings are trustworthy and that he was able to bear the weight of our sins. While this is by no means untrue, seeing the resurrection primarily as the greatest of Jesus’ miraculous signs pushed it to the background. More than once as I shared the gospel, I’d have to backtrack to say, “Oh yes, and Jesus also came back to life! Because, he is God and more powerful than death!”

Without knowing it, I was missing a key pillar of the Christian hope. Since I grew up in the church, I know I’m not alone in this. While we see it as fundamental to our faith to understand the meaning of his death, we are a little hazy on the subject of his subsequent life. But there’s something wrong when the resurrection of Christ is not central to our understanding of the gospel.

The Apostle Paul, addressing the Corinthians about their doubts over a future physical resurrection of the dead, brings them through a thought experiment. He writes,

According to Paul, if Christ has not been raised…

Those who have died trusting Christ are facing God’s eternal wrath. (v. 18)

We are the most sorry and pathetic people in the world. (v. 19)

This list shows just how devastating it would be if Jesus did not rise from the grave. But why are these things so?

Well, because the apostles claimed Jesus came back to life— and if he didn’t, they are liars.

Because if Jesus were still dead, it means he has not satisfied the wrath of God for our sins. In other words, if he did not rise, he is still under the curse of sin and has not finished paying the debt of sinners. Furthermore, “If Jesus had stayed dead, it would have proven that death had a rightful claim over Him, and since death has a rightful claim only over sinners, Jesus’ remaining dead would have meant that He was a sinner and not our Redeemer.” (“The Resurrection of Christ”)

Because if Jesus has not paid for sins completely, there is only fearful judgment awaiting believers in death. Those who died believing in Christ for eternal life would find they trusted him in vain.

Because to have staked our lives on a Christ who was not raised is utter foolishness. It is to suffer persecution for one who will not save, to labor in life and ministry for nothing, to trust in someone who cannot deliver.

If Jesus did not come back from the dead, we too are dead in our sins. We have absolutely no hope. But, wait! Paul goes on to declare, “But in fact Christ has been raised from the dead, the firstfruits of those who have fallen asleep.”

So, looking again at the list above, because of Christ’s resurrection…

We can trust the testimony of the Scriptures.

The early believers either were or had access to firsthand witnesses to the resurrection. The tomb was empty because Jesus’ lifeless body was raised with power and transformed to a new body with an indestructible life (Heb. 7:16). Jesus ate with his disciples to prove he was no ghost or vision. Those who had abandoned Christ at the garden now boldly proclaimed his Lordship, even unto death, because they had seen the Risen Lord.

Thus, our faith is more than morality and psychological wellness, right living and positive thinking. It is founded on the historical reality of a man who was declared dead and then seen more alive than ever before.

Romans 4:25 says Jesus was “raised for our justification.” His resurrection is proof our debts have been paid and the Father no longer has wrath stored up for those who take refuge in Christ. Herman Bavinck writes of Jesus’ resurrection as, “the guarantee of our forgiveness and justification” and, “a divine endorsement of his mediatorial work, a declaration of the power and value of his death, the ‘Amen!’ of the Father upon the ‘It is finished!’ of the Son.”*

Therefore, when plagued by guilt over our sins and doubts about our salvation, we look to the cross and to the empty tomb. The cross shows us Christ has borne our punishment. The empty tomb assures us there is no longer any more of our punishment to bear.

We will live though we die.

Those who trust in Christ are saved from the wrath to come. While we still grieve over the unnaturalness and sting of death, there is such hope. For the believer, pardoned for sin and brought into the family of God, death has become a doorway into life eternal. Not only are we promised salvation from the wrath of God, but Christ is the “firstfruits of those who have fallen asleep.”

Many Christians think of life after death as a disembodied, ephemeral, dreamlike existence. Nothing could be further from the picture Scripture paints for us. Jesus went through great lengths to show he had risen into a real, material body. The Christian looks forward not to an escape from the physical world, but a renewal of creation at Christ’s coming— the New Heavens and New Earth and where we receive glorious, immortal, material bodies (Rev. 21, 1 Cor. 15:48-49).

How can we be sure we will be raised in this way? We have seen the firstfruits of Christ. In farming, the firstfruits was the guarantee that the rest of the harvest would be good. It was proof of what was to come for the remaining season. Jesus was not the first person to ever rise from the dead. But he was the first person to rise from the dead into an imperishable body, raised in glory and power (1 Cor. 15:42-44).

We have a sure hope of resurrection because one who is the Son of Man, now glorified, has put off his perishable body and put on immortality (1 Cor. 15:53-54). And what has happened to him, will happen to those who are in him.

We are not to be pitied.

Though the Christian life is difficult. Though we are discouraged and downcast. Though we labor and see little fruit. Though we mourn hardheartedness and the wreckage of sin. Though we weep over prodigals. Though we are hard pressed on every side, perplexed, and afflicted.

What assurance of our forgiveness! What courage as we labor to serve him! What power over sin! What comfort as we live in broken bodies! What hope as we walk with believers through death into victory!

Crown Him the Lord of Life! Who triumphed o’er the grave.
Who rose victorious to the strife for those He came to save.
His glories now we sing, Who died and rose on high,
Who died eternal life to bring and lives that death may die. 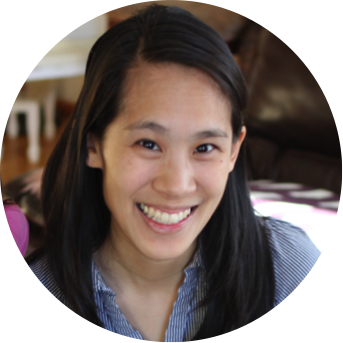 Welcome! My name is Faith, and I’m grateful you’d take time to consider some of my words here.

I snapped this photo in my car a few weeks ago while my older girls were in piano lessons. Me with my laptop, working on my manuscript. I’m not sure if I got much writing done with the younger two in the back, but I probably did some, hence the selfie and the smiling.
At the playground, my youngest sits in the lopsided plastic car on springs and calls me using an imaginary phone. "Ring Ring!…Now you pick up—no, hold the phone like this!" I’m her substitute sibling while her real ones are in school, so she’s sticking by me more than usual. She runs to play, then back to sit on my lap. Out to play, then back again.
Part of what sanctification has looked like in my life has been God reframing my thoughts of greatness, or more specifically, my own desires for greatness. Which is to say, he’s humbled me.

Reformed Margins:
Dear Ministry Wife, You Are Seen
Learning to Grieve Anti-Asian American Racism as an Asian American
For the Christian Perfectionist

SOLA Network: Combating Perfectionism in Communal Culture: A Reflection on the film “Encanto”

3 Reasons The Church Needs Asian American And Other Minority Voices