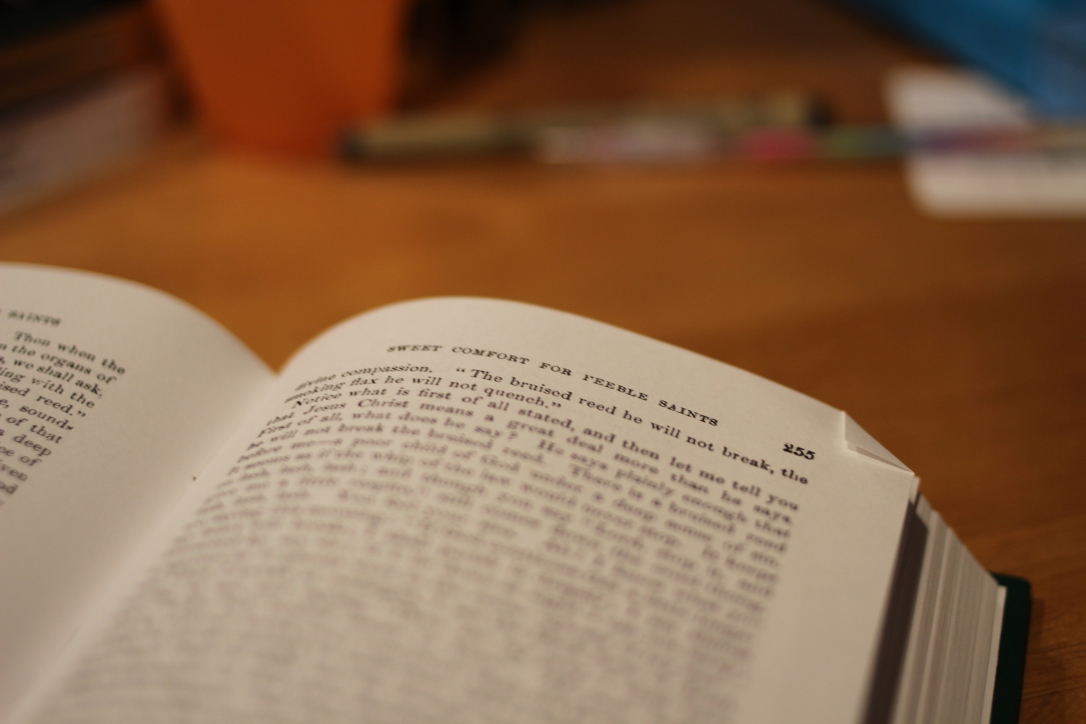 Such were the insightful words of a dear, straightforward friend after I shared about my time in prayer. More specifically, I told her that I had told God, “My heart hurts…a little.” It was pretty big for me to admit out loud, to God and to another person, about my heartache. But she was referring to my attempt to play down what actually had hurt quite a lot. I laughed because she was right, and more than 10 years later, I’m thinking again about what she said.

Ever since I was a kid, I prided myself in not making a big deal out of things my peers did. I probably thought of myself as more mature, saving my sympathy for things I thought were real problems, not boy or friend drama. There were so many people going through worse things, how could my friends or I complain about our lives? I don’t know what it was that made me start comparing people’s difficulties so early on. Certainly pride was a factor, though I think not the whole reason.

Part of comparing people’s suffering had to do with trying to make sense of the world. As a child, I was moved by reports of famine abroad or serious illness closer to home. I didn’t know how to reconcile such terrible suffering with less horribly difficult things, and I didn’t think I should make a big deal out of my relatively easy life. I knew God was involved in our day-to-day, but I couldn’t see him as sympathizing with our daily burdens. Not when there were so many others who suffered more. Not when he himself already had gone through so much for our salvation.

The moment more than 10 years ago when I admitted that my heart was hurting (albeit, toned down with “a little”) signified a breakthrough for me in learning to come to God with suffering that in my mind was insignificant but felt hard nonetheless. As I started to give God just a little leeway into my hurt, he broke through in compassion with words Jesus spoke at the famous feeding of the four thousand.

The story goes like this. After days of ministering to the crowds, healing the lame, blind, crippled, and mute, Jesus approaches his disciples about getting food for the people. The disciples protest the impossibility of this task, and Jesus performs a miracle, feeding four thousand plus with seven baskets of leftovers to spare. I had known this story since I was a child, but for the first time, I noticed Jesus’ motivation for multiplying the bread and fish.

“I have compassion on the crowd because they have been with me now three days and have nothing to eat. And I am unwilling to send them away hungry, lest they faint on the way.” (Matthew 15:32 ESV)

Jesus, who’d fasted for forty days early in his ministry, was concerned about a crowd who hadn’t eaten for three. He didn’t compare his capacity and trial to theirs. He knew some of them would not be able to handle the journey home, and in his kindness, was unwilling to send them away empty. He didn’t say, “I’m doing important things like healing blindness and sickness, bringing about God’s kingdom. You find food on your own.” He didn’t harshly rebuke them, “I didn’t eat for forty, you should be able to survive three.” He had compassion on them, the Scripture says. In the same way, he has compassion on us.

A few weeks ago, I told a friend how tired and unmotivated I’d been feeling. I wouldn’t have minded the fatigue if my mind were sharper and soul healthier. If I were out of commission physically, at least I could be getting some reading or prayer in. But I was reminded again that try as I may to separate the parts, I am an embodied soul, and my body, mind, and spirit are interconnected in complicated ways. My lack of productivity, both outwardly and inwardly, contributed to low-level guilt. I was also tired and cranky. And I was frustrated that I was being knocked out by something so common— a healthy first-trimester of pregnancy.

Then she spoke words I believed were from God to my heart. “Just because it’s common doesn’t mean it’s not hard.” (Thank God for kind friends who speak truth!)

So I have been thinking again of the gift of approaching God with our common, hard things, and want to share some of what I’ve been learning.

If God were finite, he’d need to split his time, attention, and power accordingly between global crises and individual personal requests. The news cycle and “compassion fatigue” reveal our limited human capacity to care, much less act, in response to the suffering we witness in the world. Oftentimes we assume that God is like us, triaging the needs of billions and prioritizing the urgent ones first.

Some people think going to God with the small things in our lives belittles him, making him small in our own eyes. This is true if we only ever go to him with our own wants and needs. But our heavenly Father is big enough to handle both requests for his kingdom to come and for our daily bread. He is powerful enough to shoulder our troubles and the burdens of the rest of the world day in and day out.

I’ve heard people say they don’t pray because there are so many other important problems in the world for God to tend to. I know what that feels like. Often, God provides in small ways that matter to me, and as I’m thanking him, I am embarrassed that he answers my “dumb prayers.” I’ve been trying to stop calling them “dumb” and instead think of them them as “sparrow” requests, granted by God who cares for lowly sparrows and numbers the hairs on my head (Matthew 10:29-31).

Because God is infinitely powerful, no burdens are too heavy for him. Because he is infinitely merciful, none insignificant. He knows our frame, knows when there are things that will leave us too faint to walk home, and is willing and able to provide the bread and fish we need. Learning to come to him with our common, hard things reminds us of the greatness of his compassion and the limitless of his power.

Common, hard things deepen our sympathy for others.

There are trials we all recognize as legitimate suffering— serious illness, death of a loved one, persecution, and the like. But it’s harder to minister to people when they are not as strong as we are, not “getting over” things as quickly as we would, not enduring with attitudes we think they should have. We grow impatient with such sufferers. The problem with having a measuring chart that relativizes our suffering is that it hinders us from ministering to those whose trials are deemed less difficult. Thankfully, Jesus is not like us.

Jesus endured all we face: loneliness, rejection, temptation, pain, loss, tiredness, and more. He knows all of it, from Everest-sized suffering to pebble-in-shoe trials. Yet he doesn’t wait for us to approach him with our problems only to respond, “I endured. Why can’t you?” Rather, because he was tempted in every way as we are, our High Priest mercifully sympathizes with us in our weaknesses (Hebrews 4:15).

Likewise, as we learn to admit to God that the common trials in our lives are hard, we no longer see ourself as better than others who suffer. And as we receive comfort from him in our trails, we are able to comfort others with his divine comfort (2 Corinthians 1:3-4).

Common, hard things humble us so we can receive grace and give him glory.

Marriage and parenting are God-given mirrors, revealing to ourself our true selves. Since becoming a parent, I’ve seen how impatient, unmerciful, unkind, and all-around nasty I can be. But the most humbling thing for me hasn’t been merely seeing how sinful I am. The most humbling thing has been realizing how I’ve pridefully judged others who I thought were impatient, unmerciful, unkind, and all-around nasty. If my trials were uncommon and suffering extreme, I may find a way to excuse myself. But being put through the daily, common grind and temptations others face— and failing. That has been humbling.

The common, hard things in my life have been used by God to surface pride in the ability to resist temptations I thought myself above. I didn’t think I’d be the mom with the kid screaming in the store, caring more about my image than my child. Until first trimester of this pregnancy, I didn’t understand the temptation to distract myself with entertainment on my smartphone. I didn’t think my ability to be reasonable and patient was so rooted in my good health until facing constant fatigued and nausea. And I didn’t think there was so much pride and judgment sinisterly lurking in my heart.

1 Peter 5:5 says that “God opposes the proud, but gives grace to the humble” (ESV). It is scary to think about being opposed by God. But the child of God has great comfort in knowing our Father works to humble his children. He disciplines us not just for the sake of putting us in our place, but that he may give us grace: grace in forgiveness, grace in his provision for our needs. And as we receive his grace, he receives all the glory.

When we don’t think we need him in our day-to-day, common, hard things, we miss the gift of his nearness, care, and forgiveness. When I push through ministry, family, friendship, and pregnancy on my own strength, I miss out on a chance to receive the grace of God and display his power being made perfect in my weakness (2 Corinthians 12:9). I miss out on the opportunity to show those around me that anything good in me comes not from me, but from Christ.

Our infinite God joyfully welcomes not only his strongest saints, but lovingly carries the weakest of his fold. So I’m hoping to learn to come to him more readily with my feeble heart, mind, and body. I am hoping that together we’d receive help to endure things we feel only ought to hurt “a little” and that we’d help others do the same. All so that ultimately we’d be witnesses to the boundless compassion and power our loving Heavenly Father.

My name’s Faith and I’m a Christian, wife, and mom who loves to write in hopes of encouraging others.

Reformed Margins:
For the Christian Perfectionist
Dear Ministry Wife, You Are Seen
On Whale Sharks And Wonder